To share your memory on the wall of Charles Elloie, sign in using one of the following options:

Print
Charles L. Elloie, retired Orleans Parish Criminal District Court judge, passed away on Sunday, May 31, 2020. Judge Elloie was born on April 6, 1938 in New Orleans, Louisiana, the fourth of five children of Joseph and Elizabeth Fredricks Elloie. He g... Read More
Charles L. Elloie, retired Orleans Parish Criminal District Court judge, passed away on Sunday, May 31, 2020. Judge Elloie was born on April 6, 1938 in New Orleans, Louisiana, the fourth of five children of Joseph and Elizabeth Fredricks Elloie. He grew up in the Lafitte Public Housing Development, his family being one of the original residences of the development. Judge Elloie's father was a Pullman porter on the Sunset Limited railroad. His mother was a domestic worker. One of Judge Elloie's fondest childhood memories was of his younger brother and him riding the train from New Orleans to Los Angeles, California – sleeping in the bunk beds and eating in the dining car. This first train ride sparked a life-long love of travel by train. Judge Elloie attended public schools from first grade through high school. Early in life he understood the power of education, especially for African American males. Determined to become the first of the five Elloie children to be a college graduate, he attended Dillard University, graduating in 1960 with a BA degree in Education and a major in biology. Judge Elloie taught biology and math in the Orleans Parish School System from September 1960 to 1966. In 1966 he left teaching and became the first African American in an eleven state region to be hired as an agent by the Prudential Insurance Company. He thrived in this environment – interacting with people and providing a much-needed service to many persons who previously did not have access to the type of insurance that he sold. However, despite his success he was troubled by continuing inequities within his community. Judge Elloie's love of his people and his desire to be a change agent led him to become actively involved in politics in New Orleans. In 1968 he launched an unsuccessful race for a seat on the school board. This defeat did not extinguish his fervor for change in the city's political structure, he simply worked harder to make things happen. In 1969 Judge Elloie and a close associate, Attorney Robert Collins, founded the Community Organization for Urban Politics (COUP). COUP quickly became one of the most powerful political organizations in the city, concentrating its work and influence in the 6th and 7th wards. Judge Elloie actively supported the candidacy of Moon Landrieu for Mayor of the City of New Orleans. Still eager to serve his community as an elected official, in 1969 he ran unsuccessfully for the House of Representatives. In 1970 to 1971, Judge Elloie served as Assistant to the Mayor and Director of Youth Opportunities. In these positions he brought others into the political system, provided recreational and employment opportunities for young people and challenged elected officials to remove the many economic and social barriers faced by African Americans and other people of color. Judge Elloie actively participated in the successful gubernatorial campaign State of Louisiana, Governor Edwin W. Edwards and from 1972-1975 served as Assistant to the Governor. Again, he brought others into the political process, giving many disenfranchised persons better access to economic and social opportunities. In 1975, Judge Elloie launched his last unsuccessful campaign for public office – running for State Representative in an uptown district. During this time Judge Elloie made the decision to pursue a long-unspoken desire – to become an attorney. In pursuit of his dream, he enrolled in the Southern University Law Center in 1976. His love of history, his power of persuasion and his ability to connect with people served him well in law school. In the 1978-79 school year he served as President of the Student Bar Association. His three years at Southern University Law Center further stoked his desire to help institute positive change in his community and when he graduated in 1979, Judge Elloie left ready to become a legal servant of the people. Judge Elloie had a successful criminal law practice from 1980 to 1996. His knowledge of the law, his ability to connect with people and his unrelenting pursuit of justice and equity for his clients are what made him a successful criminal lawyer. Judge Elloie was aware of the power of the court to make differences in the lives of people and believed that service as a judge of the criminal court would provide even greater opportunity for him to serve his community. This awareness and this belief led him to launch, in 1995 a successful campaign for Orleans Parish Criminal District Court judge. He was reelected without opposition for a second term in 2002. In 2007, Judge Elloie retired following a tenure of service that brought equity of judgment and provided many with opportunities for second chances, while making his court accessible to the community. He had fulfilled his desire to become a legal servant of the people. Judge Elloie is survived by his wife and constant companion for more than 30 years, Dr. Pearlie Hardin Elloie; two sons, Charles L. Elloie, Jr. and Joseph C. Elloie; one brother, Wilbur Ronald Elloie; nine grandchildren, one great grandchild, many loved nieces, nephews, other family members, friends and associates. Judge Elloie is a member of the St. Katharine Drexel Catholic Church where he served as Lector. He is also a life-time member of Omega Psi Phi Fraternity, Inc. A Funeral service honoring Judge Charles L. Elloie will be held at Charbonnet Labat Glapion Funeral Home, 1615 St. Philip Street, New Orleans, LA 70116 on Saturday, June 6, 2020 at 1 PM. Interment PRIVATE. ALL IN ATTENDANCE ARE ASKED TO ADHERE TO COVID 19 RESTRICTIONS WHICH HAVE BEEN IMPLIMENTED BY THE STATE OF LOUISIANA.
Read Less

To send flowers to the family or plant a tree in memory of Charles L Elloie, please visit our Heartfelt Sympathies Store.

We encourage you to share your most beloved memories of Charles here, so that the family and other loved ones can always see it. You can upload cherished photographs, or share your favorite stories, and can even comment on those shared by others.

Posted Jun 06, 2020 at 04:29pm
My condolences & prayers to the family of Brother Charlie Ellioe. He was my fraternity brother & good friends with my late uncle Mervin Wallace. They attended Dillard University together & was initiated into the Omega Psi Phi Fraternity during the same semester. Judge Ellioe was a very charismatic & intelligent man and we always looked forward to seeing him at the fraternity house. Rest In Peace Brother Charles Elloie 🙏
Brother Terence Bradford, Omega Psi Phi Fraternity!♎️
Comment Share
Share via:
EJ

Posted Jun 06, 2020 at 11:50am
A leader is one who is willing to take risks.
As T. S. Elliot said, "Only those who will risk going too far can possibly find out how far one can go".
I admired Charlie because he deeply believed that our people should go farther than our oppressors had permitted, and he took personal risks to show the ways for us to go farther. Our community needs to honor him despite any imperfections.
Rest in Power my friend.
Attorney Ernest Lake Jones

Posted Jun 05, 2020 at 11:45pm
Lifting the family of Judge Charles Elloie in prayer. He taught me Biology at James Derham Jr. High and was an awesome teacher.
Comment Share
Share via:
EJ

Posted Jun 05, 2020 at 10:16pm
My deepest sympathies to Pearlie and the family on Charlie's passing.
Always a smile on his face and a kind word for eveyone. I can see him
in his seeksucker suit and hat. Always polite and courteous.
I deeply appreciate his service on the Bench and his understanding of
our people's plight. A man before his time.
Rest in Peace Charlie.
Edith Gee Jones
Comment Share
Share via:
JD

Posted Jun 05, 2020 at 09:03pm
My deepest condolences to the Elloie family and indeed the City of New Orleans. Charlie was a great friend. He always had a smile on his face and something positive to say.
James A Dunn, Jr.
Comment Share
Share via: 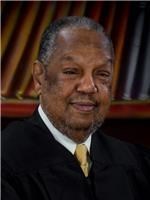