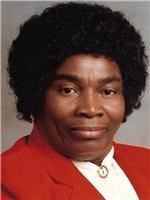 Viola Davis Brady departed this earth for her heavenly home on Monday, March 8, 2021. She was born on June 11, 1930 in Clinton, LA to the late Albertha Knox and Young Davis, Sr. Viola was previously married to O'neal Brady and to this union , one child was born, Diane Brady. She accepted Christ at an early age in Clinton, LA at St. John Baptist Church. She previously held membership at Pilgrim's Rest Baptist Church for many years. Upon joining James Chapel MBC, she was a member of Usher Board #2 until her health began to fail her. Viola was a housekeeper for several families for many years, until her retirement. She leaves to mourn her death, devoted daughter, Diane Brady Speaks (the late Gerold Speaks, Sr.); two grandchildren, Gerold Speaks, Jr. and Janelle Dyan Speaks; three great-grandchildren, Lirone, Geronique and LaRez Speaks of Corpus Christie, TX; siblings, Bessie T. Matthews and Shirley T. Young of Jefferson, LA., Mack L. Thomas (Carol), and Catherine T. Cage of Baton Rouge, LA, Young Davis, Jr. of San Francisco, CA and Inez D. Crosby of Los Angeles, CA. Also survived by many nieces, nephews, cousins, other family and friends. In addition to her parents, Viola is also preceded in death by siblings, Pearlie T. Muse, Walter Thomas, Sr., Wilbert Thomas, Jr., Gloria T. Shoemaker, Roxie T. Wagger, Margaret K. Pea and James Davis. The family would like to thank everyone for their support, prayers and offers of help during their time of need. We also thank the staff of Ferncrest Manor, where she has resided for the past three years, along with the doctors and staff of LCMC New Orleans East hospital for the exemplary care given to our loved one. A Celebration of Life Service honoring Mrs. Viola Davis Brady will be held at James Chapel Baptist Church, 4228 Thalia Street, New Orleans, LA 70125 on Saturday, March 20, 2021 at 11 am. Interment Providence Memorial Park. Visitation 10 am in the church.